The Different forms of Magic Spells

Black Magic is the use of occult spirits in order to solve various problems in life. Thus people used to consider Black Magic to be hazardous by nature. Some believe that magic is not real, but a person who approached these powers knows that Black Magic is powerful enough to be used to kill someone. Hopefully, not many spellcasters are capable of that, and we all know that even when completely mastered by the spellcaster, backfires may occur when such extreme use of magic is done.

More commonly, Black Magic is very popular amongst spellcasters who need to cast a break up spell in order to separate two lovers. It makes no doubt that in those two cases, the use of occult energies will be involved.

However, Black Magic can also be used to find love. Hence it's quite frequent to find love spells formulas to make someone love you or get a lover back. Occult powers will be involved in these circumstances as well. Unlike White Magic spells, Black Magic spells don't need to respect any code of ethic: Black Magic practitioners have no taboos at all. Any kind of spiritual energy can be actively used, and of course, it comprises occult energies.

But why is Black Magic so popular? This magic is "easy" to learn. For someone preoccupied with achieving fast results, learning Black Magic to such a point that you will be able to cast your spell will take much less time than if you were to do it with Wicca or White Magic. For that reason, and because it satisfies our desires at any cost, Black Magic is very seductive, but keep in mind that it involves evil spirits. Unless you are very comfortable with spellcasting, I don't recommend you to try it yourself. Conjuring occult spirits may seem easy and accessible to all, but casting away these spirits can be a real problem if you don't know what you're doing!

The rituals and spells cast by Black Magic spellcasters are very strong and effective. Various objects like candles, herbs, pentagrams, and talismans are used in the black magic rituals to get the desired effect. Symbols are also a crucial part of Black Magic. Most of the time, these symbols are drawn directly on the ground as they represent doors through which occult spirits from the Underworld will be conjured. But other than these objects and symbols, the faith of the person performing the ritual must exist. Unless you have faith and believe in the power of these spells, it isn't easy to get the desired results. 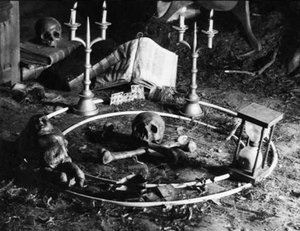 A Black Magic spell being cast
To defend Black Magic spells, this magic is incredible and makes the impossible become possible thanks to amazing powers. Yes, Black Magic deals with various dark themes like death, severance, and entropy. Yes, Black Magic requires knowledge in necromancy and conjuration of the spirits of the dead. It's true. But there are love spells in Black Magic that are as much effective as the White Magic ones. So, if a person controls the spirits conjured - be it occult - so it doesn't backfire, where is the problem? There's none in that case. Of course, as mentioned above, it necessitates that you are able to control the black magic spirits you invoked to reach the desired result.

The different faiths behind Black Magic

Different faiths exist amongst the persons practicing Black magic. Some of them believe that the main difference between White and Black Magic lies in the different spirits that are called. But they believe that the basic ideas and theories behind both remain the same. A different group of persons believes that Black Magic is completely different because dangerous and dark powered energies are used in Black Magic. Sharp objects, blood, dead animals, human bones, etc., might be needed during the spell casting process or the rituals. For these persons, these important differences in the process of spell casting itself make the two magic uncomparable.

The effects of Black Magic Spells

Basically, the effect of Black Magic spells and White Magic spells remain the same if the intentions behind the spell casting are the same. In other terms, if a Black Magic spell that respects the Law of Harmony was cast, it would not backfire. If it doesn't, then the results depend on the knowledge of the spellcaster and his capacity to control the occult energies he summoned.

If the spellcaster is not able to do that, two things might happen. In the best case, the spell will not work or show weak and concise results. In the worst case, the spell backfires and drives negative and occult energies back to the sender, who is the spellcaster. So if you're casting your magic spell and did something wrong, you might experience bad luck in your life on a very high level. That's why beginners in magic should always stay away from Black Magic, even if it seems to be the easiest one at first sight. It is not the case if you want to cast your spells and work correctly with Black Magic.

More information about spells and spellcasters: