The Different forms of Magic Spells

How Voodoo spells can change your love life thanks to Voodoo dolls?

Voodoo is very famous all across the world. Magic experts generally agree to categorize Voodoo in three different types. These voodoo types are namely Haitian Voodoo , Voodoo in Louisiana (otherwise known as New Orleans Voodoo), and the Voodoo that still exists where its origins born, in West Africa. Voodoo practitioners and spell casters tend to base their faith in the type of the Voodoo system you believe in the most. It's also a question of culture, and needless to say, persons living in the USA are generally practicing what we just called "New Orleans Voodoo." Another way to know what type of Voodoo you can get into is to know the Voodoo practiced by people around you. Maybe you know a good houngan or mambo living nearby? Then you will most likely adopt the Voodoo type practiced by this person.

You are free to choose any of these voodoo types. They're equally powerful and will give you real results whether you're looking for spells for love, money, protection, or revenge.

The origins of Voodoo spells

Voodoo spells and their use to solve problems with love, health, or wealth have been existing in the Voodoo religion for many centuries. The religion of Voodoo, which is born in Benin and other countries of the region, establishes a system of belief where spirits - named "Loas" - play a major role. Good or bad, it is believed that Voodoo followers can request the help of these Loas to solve a personal issue.

Yet, not every Voodoo follower can enter in contact with the Loas. To do so, they will need the assistance of a Voodoo priest. Voodoo priests stand by the name of Mambo (female priests) or Houngan (male priests). The more commonly go under the name of spellcasters, but remember that these persons are first of all real priests who can enter in contact with spirits that are regarded as deities. They conjure real spirits in the middle of religious ceremonies that anybody can attend. There you will see some of the Voodoo followers entering a state of trance, during which the spirit takes possession of their body. This ritual is commonly used as traditional healing or to deliver one person from the Evil Eye or bad spirits.

Some Mambo and Houngan conduct religious ceremonies and conjure spirits on behalf of others who request their help. For example, love spells have existed in the Voodoo system for centuries. They are very powerful, achieve the desired results, and have a direct connection to Erzulie, the Voodoo Goddess of Love, one of the most powerful Loa.

To point out a few differences between the three forms of Voodoo mentioned above, let's mention that Gris-gris is praised by the New Orleans voodoo system (especially the notorious Voodoo dolls). In contrast, the Haitian Voodoo system emphasizes paraphernalia occult and voodoo queens. These systems are used to cast effective and strong real voodoo spells. 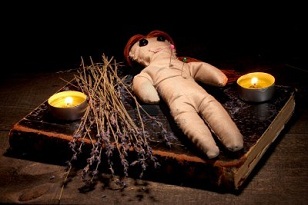 A Voodoo doll to cast a spell
During the slave trade period, the Voodoo system of belief became popular in the United States and the Caribbeans, specially Haiti. But Voodoo was born in Africa. Voodoo spells became very popular amongst Voodoo followers, and they were unique in their ways. It is frequent to read stories of Westerners from England and France, whose countries colonized parts of West Africa, that mention the strangeness of Voodoo and their fear towards its unknown powers. That's why it also became trendy in Europe, where Voodoo priests rapidly established themselves to offer their services as traditional healers. Another reason we need to mention (that also explains the growing popularity of Voodoo in the Western world) is that it's not very different from something westerners know. Voodoo was born from the understanding of Catholicism by West Africans and mixed with their traditional beliefs. All in all, we can say that Voodoo always fascinated the persons who had the chance to approach it.

The importance of objects such as dolls in Voodoo spell casting

The faith in powerful objects like amulets or Voodoo dolls has been a tradition in the Voodoo occult magic. On the other hand, Voodoo priests often use the roots of a not-so-popular poisonous tree named "maudit tree". Combined with other items like candles, crucifixes, bones, nails, black feathers, rare powders, holy bread, etc. All these ingredients are used during Voodoo rituals that intend to request a favor from a spirit. Voodoo spells can also be used to create amulets for protection.

The people who believe in Voodoo magic often emphasize the faith of their ancestors. According to them, their ancestors were mighty and had the power to survive for a longer time than nowadays' life expectancy. Therefore the spells and the tricks written down by their ancestors are still followed by them to date to achieve success in various spheres using these spells.

As rumored, Voodoo is not mostly about the evil doings, and in that sense, it is often wrong to associate voodoo spells with Black Magic spells. Voodoo followers believe that the spirits can help them solve various problems they may face in real life. So, it is not evil nor wrong to rely on magic for Voodoo believers because magic becomes a part of their belief system. But since Voodoo is also used to achieve evil things, it has a bad image. But when you think about it, Voodoo is not evil by nature. It's the use we make of it that can be harmful. For that reason, and because of the negative reports recently done on Voodoo, personal rituals and Voodoo spell casting became prohibited. Not officially, but a Voodoo priest charged for sorcery can lose his rank in the religious hierarchy.

However, using these supernatural elements and spiritual powers is not showing any disrespect to their ancestors, and so Voodoo magic still exists in the shadows. Hence most of the spells and magic are done behind closed doors, away from the public, to achieve success.

More information about spells and spellcasters: